Brother Bonaventure (Martin) Gaul, O.S.B., was a private with the 61st Regiment of Pennsylvania Volunteers, serving as an infantryman. He was enrolled on the fourteenth day of July, 1863, to serve three years. He was discharged from the service on the ninth day of June, 1865, at Balls Cross Roads, Pennsylvania, He later moved to serve in the 2nd Division, Hospital 6th Corps. His pension papers note that following the war he was afflicted with neuralgia that lasted for weeks.

Brother Bonaventure’s obituary appeared in the September 21, 1896, issue of the St. Vincent’s Journal, Volume VI, Number 1, pages 38-39. It noted that “on the 21st day of July last, St. Vincent’s Abbey suffered a great loss in the death of Bro. Bonaventure Gaul. The Brother, whose name and person is familiar to all of our students, was born in Lauda, Baden, July 23, 1829. At an early age he came to the United States, and entered the monastery on the 9th of September, 1855. On the 2nd of Febraury, 1863, he made simple profession. His promptness in the fulfillment of his religous duties, his piety and humility, were a source of edification to the whole community. Though a man of artistic tastes, and no mean erudition, he was seen day by day in the dingy shoe-shop, plying his useful trade as the monastery cobbler. His spare moments were devoted to sculpture, to which art he was passionately attached. His statues of saints and angels, but especially his Madonnas, some of which ornament the church and the halls of St. Vincent’s, evince a skill which seems wonderful when we consider that he enjoyed no instruction in the art, and devoted to it only the moments snatched from his other duties.

“During the late war, Bro. Bonaventure was drafted and went to the front. He was attached to the ambulance corps of the army operating in Virginia, and the knowledge which he acquired in this position, concerning the treatment and care of wounds, served him in good stead in after years. Many a former student, who has perhaps long forgotten the brother’s name, will remember the good old shoemaker who treated his bruised finger, broken arm or sprained ankle. Even though applied a little gruffly, his remedies were always beneficial. For the services rendered his adopted country in the time of her need, Bro. Bonaventure, during the last years of his life, drew a small pension. He died as he had lived—a true monk.” 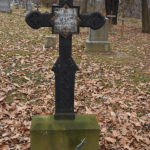