Sylvester Noel was born in 1840. Following the outbreak of the war he joined the army and was placed in the 11th Pennsylvania Regiment, Company K.

After the eleventh regiment was formed, it was sent to Camp Curtin. The regiment experienced its first combat experience at Falling Waters, Virginia on July 2, 1861. This battle ended with a victory against the Confederates under the command of Colonel Stonewall Jackson. Later, on June 26, 1862, the regiment partook in the Battle of Mechanicsville. Unfortunately, the regiment could not secure victory and a majority of soldiers became prisoners of war. This regiment remained war prisoners until August 5, 1862 when a ransom was paid for release of the soldiers.

Later on, the eleventh played a role in the Battle of Gettysburg, arriving on July 2, 1863. During this battle, 83 members of the regiment were wounded with three members being killed. This was the last large battle that the regiment participated in. It was mustered out the following year. A number of veterans buried in Saint Vincent Cemetery were a part of this regiment.

Following the war, Sylvester Noel married Ellen Noel and together they had a child. He died on June 5, 1871 at the age of 31. His gravestone is in section B. 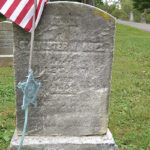